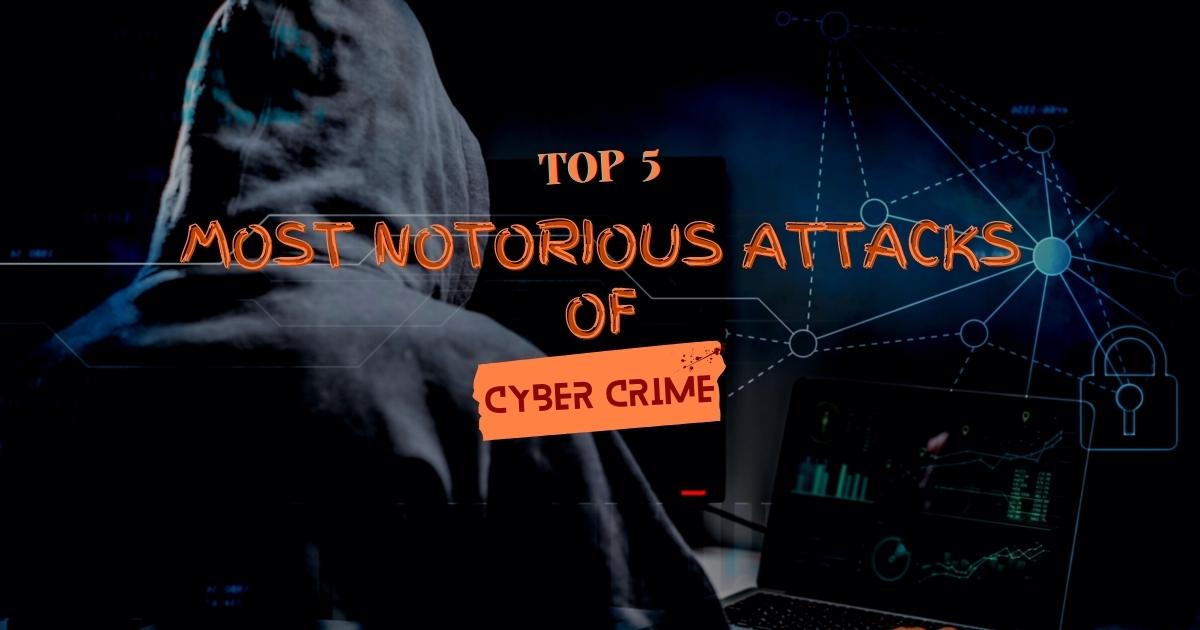 The majority of  notorious attacks of Cybercrime are intended to damage the software. In the worst circumstance scenario, the user is presented with an on-screen ransom demand saying that the computer has been encrypted and can be opened after payment. It is ransomware. Or, other times, it is a crippling DDOS attack that puts busy servers down for an extended period.

Often, however, nothing noticeable happens since many forms of malware operate as covertly as possible to achieve maximum information leakage before they can be detected. However, the scope or complexity of inevitable cyberattacks cannot fail to draw the entire world’s notice. In this article, we will discuss Top 5 most notorious attacks of Cybercrime of the most vicious and malicious types that occurred in the last twenty years or so.

In 2009, Google’s Chinese headquarters discovered a high-security breach in December. It opened a pandora’s box that linked the Chinese government officials to have direct involvement with the violation. The hackers got access to many Google business server systems, stealing intellectual property. Google stated in a blog post that it had evidence to believe that the attacker’s original objective was to obtain the Gmail accounts of certain people.

These “certain people” happened to be none other than human rights activists from China or of Chinese origin. As the organization investigated more and went deeper, they discovered that multiple Gmail accounts from the United States, China, and Europe had been used without any authorization whatsoever.

All those emails belonged to human rights activists in China. All eyes were drawn to the government of China, which has long been blatantly violating the fundamental human rights of the ordinary Chinese people for years and years.

It was a massive embarrassment for the Chinese government how much they might have tried to deny their hand in it. Responding to this violation of intellectual property rights, Google relocated all its servers from China mainland to Hong Kong in March 2010. Now lets move to next biggest cyber attack in history.

The WannaCry ransomware outbreak put ransomware and computer malware on everyone’s radar, including individuals who didn’t know about computers. Using Equation Group hacking team exploits available openly to the public, thanks to the Shadow Brokers, the attackers developed a beast — a ransomware encryptor so powerful that it could rapidly spread over the Internet and local networks.

Over 200,000 machines in 150 countries were brought down during the four-day WannaCry ransomware outbreak. This also included essential public infrastructure machines. WannaCry encrypted all devices, including medical equipment in several hospitals, and some firms were forced to shut down work. WannaCry is the most widespread of recent assaults that have taken place during recent years.Next in list of Top 5 most notorious attacks of Cybercrime is webbrowser.

Yahoo! has been the victim of at least two significant security breaches. Yahoo announced in September 2016 that a 2014 hack had affected the data of at least 500 million consumers. Then, four months later, it again revealed that another hack had occurred in August 2013, compromising the data of over a billion Yahoo! users.

The corporation could not explain why it took such a long time to notify the breaches, which could lead to severe troubles with authorities. In 2011, the United States Securities and Exchange Commission released recommendations that mandated corporations to disclose important information about cyber events if they potentially affect investors. According to reports, the agency looks into the firm and the circumstances.

The notorious title of the most expensive outbreak does not belong to WannaCry, which we read about earlier, but it goes to ExPetr, a ransomware encryptor. The worm traveled over the Web, irrevocably encrypting every computer it came across in its path, using the EternalBlue and EtrernalRomance exploits.

Although the overall number of infected devices was lower than that of Wannacry, the NotPetya or Expetr virus mostly targeted businesses because one of the original transmission routes was through the banking program MeDoc. The fraudsters gained control of the MeDoc update server, allowing many clients to get malware disguised as an update, which spread over the network. The NotPetya cyberattack is believed to have caused $10 billion in damage, whereas WannaCry is estimated to have caused $4–$8 billion in damage.

The most well-known cyber assault was perhaps the complicated, diverse virus that destroyed uranium-enrichment centrifuges in Iran, thereby halting the country’s nuclear program for many years. Stuxnet was the first to spark discussion about using cyberweapons against industries. Nothing at the time could compete with Stuxnet in terms of sophistication or

being guileful – the virus was able to propagate invisibly through USB flash drives, infiltrating even systems that were not linked to the Internet or any local area network. The worm swiftly grew out of control and infected many thousands of computer systems worldwide.

But it couldn’t harm those machines since it was designed for a specific purpose. The worm only appeared on systems running Siemens programmable controllers and software. Upon arrival on that type of machine, the controllers of the machine were reprogrammed. They set the speed of rotation of the uranium-enrichment centrifuges extremely high. As a result, this destroyed them physically. With this we are coming to conclusion of biggest cyber attack in history.

We have discussed the most famous Top 5 most notorious attacks of Cybercrime in history . Technology is getting updated to stop hackers from accessing unauthorized data. Anti-virus and firewalls etc., all forms of security are being upgraded.

At the same time, the hackers and crackers are also updating themselves to penetrate any firewall or anti-virus and infect machines to create next Top 5 most notorious attacks of Cybercrime. We should leave no stone unturned to ensure that our computers are always protected with the latest software. Hope you like the article Top 5 most notorious attacks of Cybercrime-biggest cyber attack in history